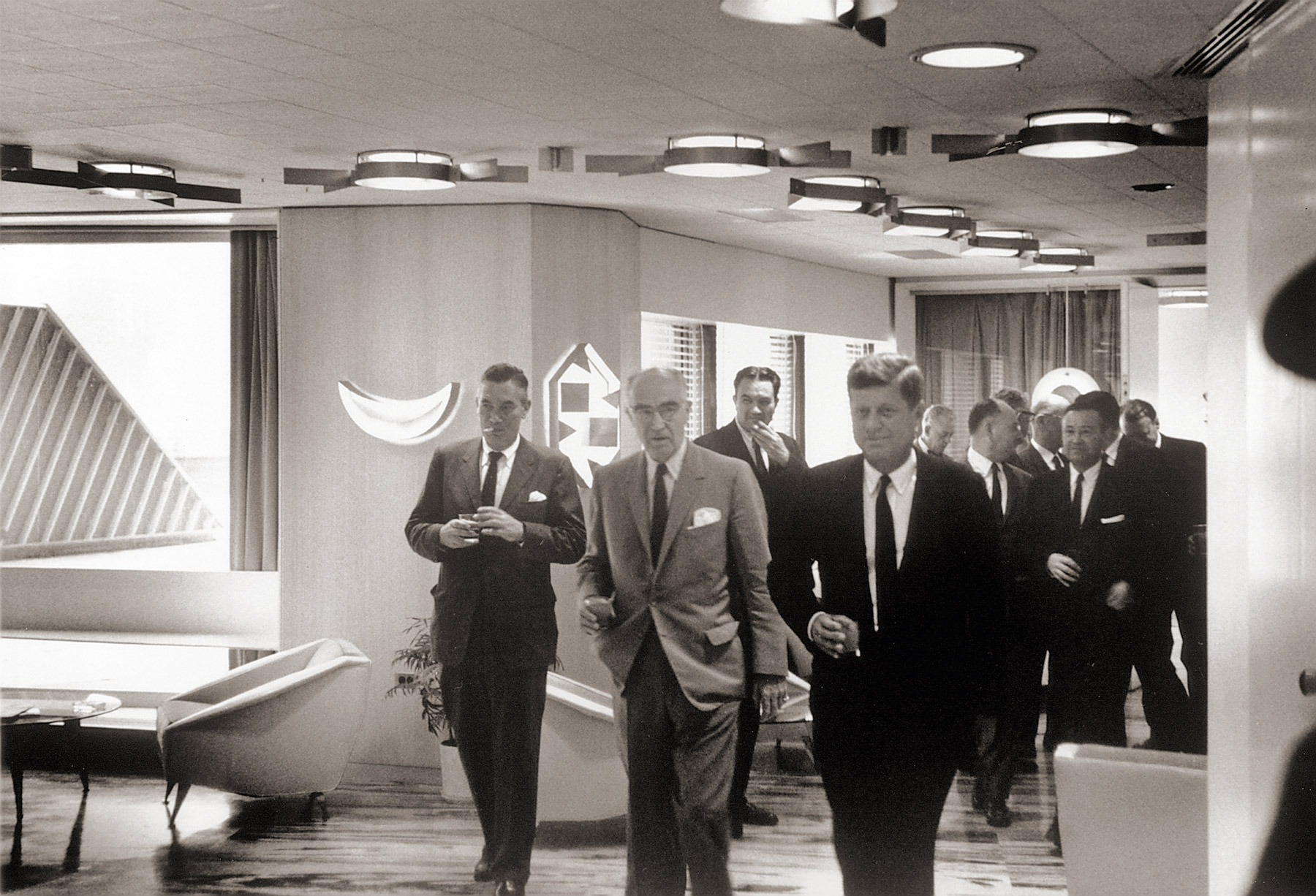 The Time&Life Building by architecture firm Harrison, Abramovitz & Harris was the first expansion west of the Avenue of the Americas of the Rockefeller Center, a masterpiece of American art deco designed by Raymond Hood in the 1930s. The client for the project was again Nelson Rockefeller, who wielded a jackhammer to begin excavations in 1957. The building was erected in record time and inaugurated in December 1959. The event featured an appearance by Marilyn Monroe, who posed for photograph

The main tower, 179m tall with 48 stories of glass and steel, is arguably Harrison, Abramovitz & Harris’s most beautiful work for its simplicity and the harmonious proportions between the glass and the structural steel members. A particularly notable feature is the L-shaped square in front of the building, where the sidewalk features a wave pattern evoking the pavements of Copacabana in Rio de Janeiro, but is actually inspired by a restaurant in Belo Horizonte designed by Oscar Niemeyer in 1947. A rectangular fountain and a sculpture titled Cubed Curve by William Crovello were added later. The interior is surprising: Wallace Harrison personally designed the lobby, panelling it entirely in satin-finish steel and embellishing it with works of art by Josef Albers and the Mondrianesque entrance wall designed by Fritz Glarner. Still considered New York’s most beautiful lobby, the New York Preservation Commission added it to its list of heritage landmarks in 2002. In addition to Harrison and Gio Ponti, who designed the auditorium on the eighth-floor terrace, other famous architects put their names to the building’s interiors, including Alexander Girard, who designed La Fonda del Sol Restaurant with South American inspiration both in the cuisine and the meticulously designed furnishings; Charles Eames, with his reception and lobby for Time magazine on the 27th, 28th and 29th floors; William Tabler, who designed the Time corporate restaurant on the 47th floor; and George Nelson, whose Hemisphere Club and Tower Suite on the 48th floor was once New York’s loftiest eatery. These spectacular spaces, the work of the most innovative architects and designers working in the post-Second World War period, made the Time&Life Building one of New York’s most fashionable gathering spots, frequented by bigwigs from the world of media, such as Time editor-in-chief Henry R Luce, celebrities of the silver screen such as Marilyn Monroe, photographers and artists of the calibre of Robert Capa and Lyonel Feininger, leading businessmen and entrepreneurs (Nelson Rockefeller, first and foremost), and of course politicians and statesmen such as John F Kennedy, the 35th president of the United States. From the day of its inauguration, life in the Time&Life Building has been intense and stimulating.

The Time Inc journalists called the entire complex home. It was an obligatory destination for all tourists visiting New York, who were attracted partly by its restaurants and clubs. It was featured in television series and movies, including The Secret Life of Walter Mitty (2013), whose protagonist, a negative assets manager played by Ben Stiller, sets out to resolve the mystery of a missing negative that was to be used for the cover of Life. The television series Mad Men, set in the 1960s, has its fictional headquarters on the 37th floor of the building. It is indeed an exceptional setting, representing the manifesto of American post-war architecture and design.