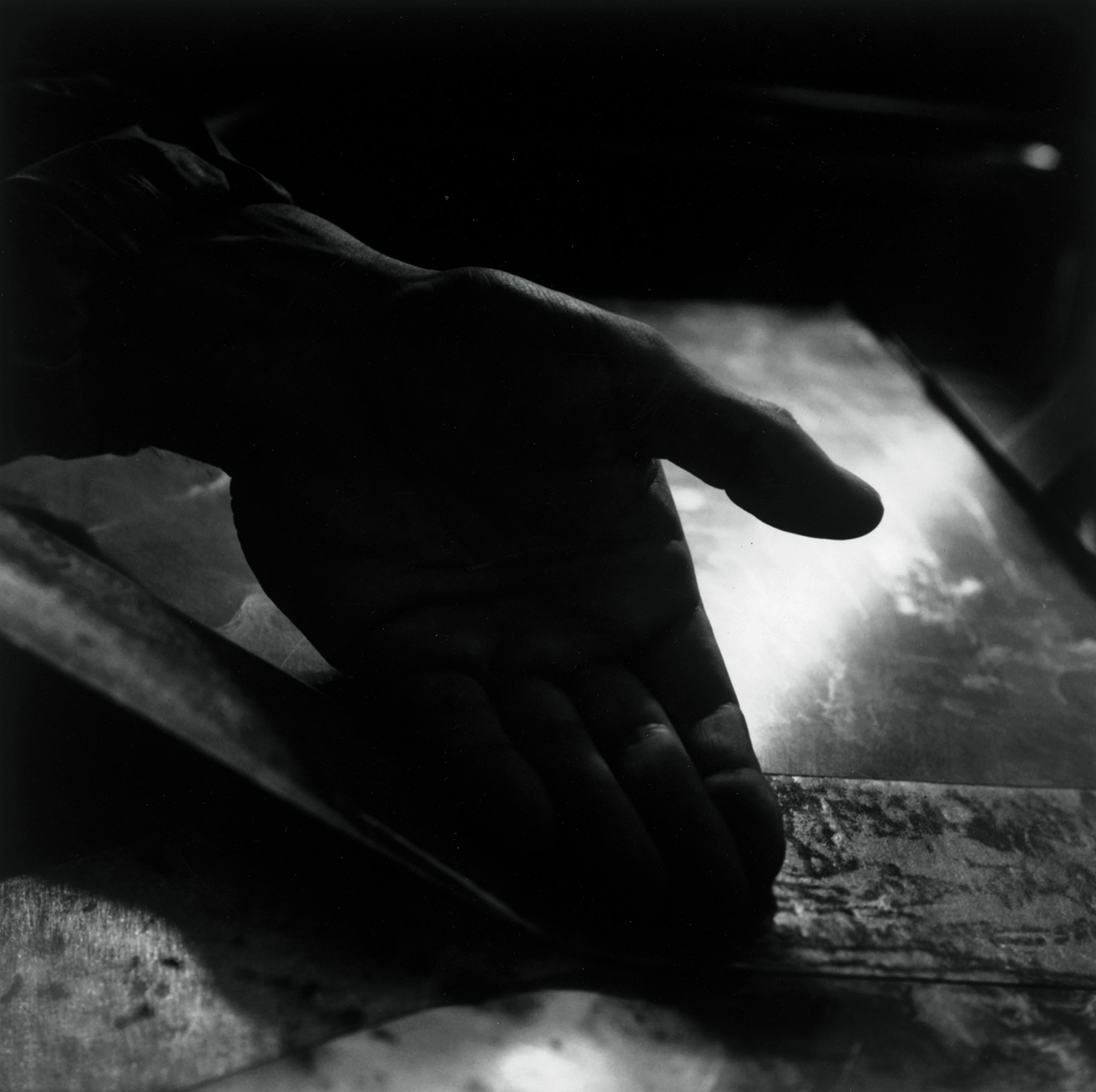 A story is the beginning, the stigmata of what will be. In that image, in that syntax, there is already Everything. So the hand that opens towards the light rents the blacks that Antonio Biasiucci has declined in the form of volcanoes, cows, ex-votos, as if his works were a permanent need to pull light out of the dark, to differentiate space and signs from the sparkling dark. Primordial signs, from nature and from man with his devotions, ancient and contemporary. In his gaze and in his photographs we are first struck by the iconographic imagination of Sense. These are definitive images of trace and matrix where nothing is descriptive but everything is the search for the essence of forms and transfigured surfaces, for another Knowing.

Between the unfathomable depth of the black and the shafts of light, always painterly, we see unfolded the border of questioning compositions, passionate but classic, which move perception and interpretation infinitely.

Just as with his Hands, now, in this work.


Hands joined in prayer, opened in greeting, closed with rage. They are wooden, metal, light. They have touched and caressed, they have loved and lived. They are dirty, full of work, wounded. Hands that know, about work and life. Hands with memory of gestures and surfaces, bodies and objects, waits and thoughts. Geometrical hands of air and space. Naked hands. Real hands. Biasiucci’s hands run over land and landscapes, stations, alleys, stables, across uninhabited places and the industrial areas of Brianza. They are hands that understand and work because they think. They are of a strong nature like volcanoes, signs of a material that boils and trembles. In the areas of production, perched on numerical control machines, infiltrated inside the paint rooms, between assembly and storage, he captures the everyday gestures, the gestures never taken for granted, of work. At the moment when the design idea becomes real, concrete, measurable in centimetres, angles, folds, because that is where idea becomes action, thought becomes object, when the gesture gives life to the aesthetics of representation. So hands become icons, sculptures, remains on which work fixes another poetic declension, of another infinite tale of the world. Antonio Biasiucci (Dragoni 1961), lives and works in Naples. His interests and research range from anthropological photography to the rural world of the countryside around Naples to urban outskirts. In 1984 he started working with the Osservatorio Vesuviano, carrying out extensive documentation on the volcanoes active in Italy. With narrative cycles such as Res, Magma, Vacche and Ex-Voto he has affirmed himself as one of the most authoratative and original photographers on the Italian and international contemporary scene.

His works are part of permanent collections in museums and institutions such as the Centre Méditerranéen de la Photographie, the Bibliothèque Nationale in Paris, the Departamento de documentaciòn de la cultura audiovisual in Puebla, Mexico, the Centre de la Photho graphie in Geneva, the Château d’Eau in Toulouse, the Maison Européenne de la Photographie in Paris, the Fondazione Banca del Gottardo in Lugano, the Musée de l’Elysée in Lausanne, the Galleria Civica of Modena, the Fondazione Banco in Naples, the Fondazione Sandretto Re Rebaudengo per l’Arte Contemporanea, the Calco- grafia di Stato in Rome, the PAN-Palazzo delle Arti, Naples and the Unicredit Collection.

He has received important honours such as the Kraszna-Krausz Photography Book Awards and the Bastianelli Prize. He has held personal and group exhibitions in public and private institutions such as the Centro San Fedele in Milan, the Peggy Guggenheim Collection in Venice, the PAN, the Museo Archeologico, Villa Pignatelli and the MADRE in Naples, the Centre de la Photographie in Geneva, the Museo dell’Ara Pacis, the Scuderie del Quirinale and the Palazzo delle Esposizioni in Rome, the Barbican Arts Center in London, the Musée de l’Elisée in Lausanne, the Murray and Isabella Rayburn Foundation in New York, the Uffizi in Florence, the MOCA Museum in Shangai, the MEP in Paris. He has taken part in the meetings in Arles – the European Kodak Panorama Prize in 1992, the Montepellier Photography Biennial and the Venice Biennial. He has collaborated with the makers of documentaries including Nero by Pappi Corsicato and Camera segreta by Lavinia Longo

The artist Claudia Vieira describes her practice as being “one continuous line, starting in 2001 first on paper, then on the wall, to finally reach actual space.”

“Ponti style” is a lifestyle that emerged through six decades of the creative practice of Gio Ponti (1891-1979).

The architect Edoarda De Ponti lives in a Milanese home designed by her grandfather, Ignazio Gardella.