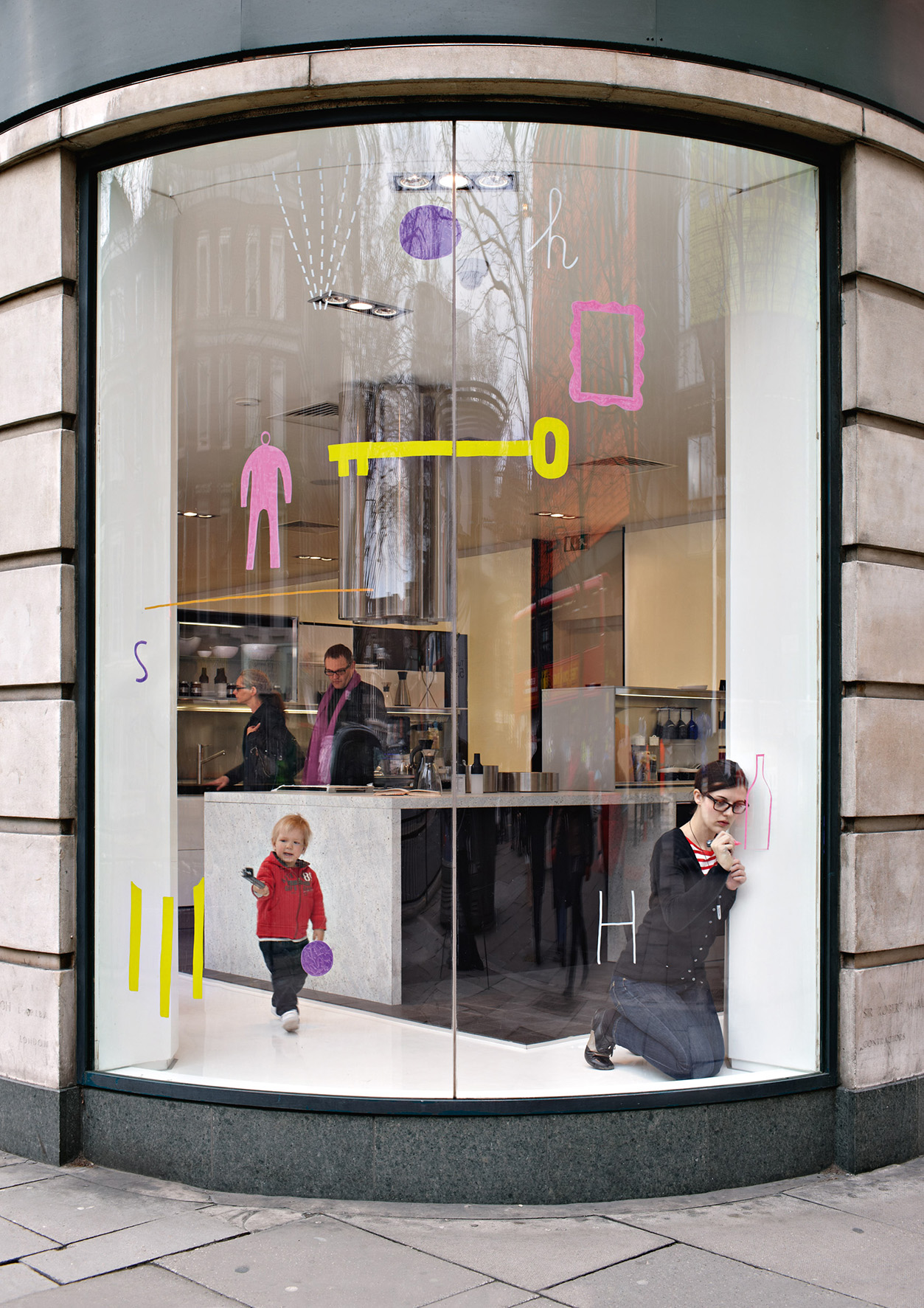 A slide, a diaphragm, a layer. An invitation, a promise, a set. Is this not the window of a showroom? Is it not the sign of the secret existence of objects, of their glimpsing out at life, of their desire to remind us of their beauty and their vanity?


Everything happens on that surface that divides but reveals, between the expectation and the function, between the project in planning and the city, between nearness and distance. All in that territory suspended between the idea they contain and the experience they transmit. On that nude thickness, that transparent boundary, that invisible barrier which separates the world in a room from the outside world, Miro and Olimpia Zagnoli intercept glances and lock eyes. And they catch the mirrored gesture which takes the interior out and the exterior in, the urban landscape between sofas, kitchens and beds, photographed realities. A short circuit between real objects, their representation and the casual nature of the urban scene.

A refined voyeurism where sensitivity of vision and action dialogue without continuity with the voyeurism of products, life on the pavement, the joyful and anxious hurry of ordinary people. A sense of the contemporary in which the aesthetic gesture of being and appearing are the pretext for a dialogue beyond spaces, people and disciplines is impressed upon that thin screen, so fragile and so strong. And so that frame, curved but cornered for a mind moving challenge of geometry becomes the way to interaction, the stage for a performance which goes beyond entertainment to become the ground for new experimentation. Where spaces become fluid, permeable, other. Places for experience and belonging from dawn to dusk, matrixes of knowledge and new contemplation. Olimpia Zagnoli (1984) lives and works between Milan and New York. Freelance illustrator, she publishes in magazines and newspapers, designs book covers and posters, exhibits in galleries in Europe and the US. She collaborates with the New York Times, the New Yorker, Sole 24 Ore, Corriere della Sera, Io Donna which publishes her illustrations weekly, and with numerous publishers including Feltrinelli, Mondadori, Glamour and Corraini.

Miro Zagnoli (1952) lives and works in Milan. Photographer, he has been working on research into interaction with the artificial world and the dialogue between the visual media since the eighties. A visual language which follows parallel lines, that of the author with successful cycles exhibited in shows and museums, and that of the object, born of the meeting between the world of design and collaboration with designers, the most famous businesses from the world of international design, architecture, furnishing and art magazines. He holds regular seminars and workshops in universities and Masters courses

Cities and continents. The Window with the performance of Miro and Olimpia Zagnoli, created in the London Flagship store on 12th and 13th March 2010, and the action of a story told through pictures. A place for interaction, reference and dialogue. Wandering and transversal it moves from London to Milan, Milan to New York, London to New York. Wherever we find the sign and sense of an international Group which speaks the language of design, of communication, of installation.

The new Axel Springer building in Berlin is home to journalists and tech gurus, editors and programmers alike.