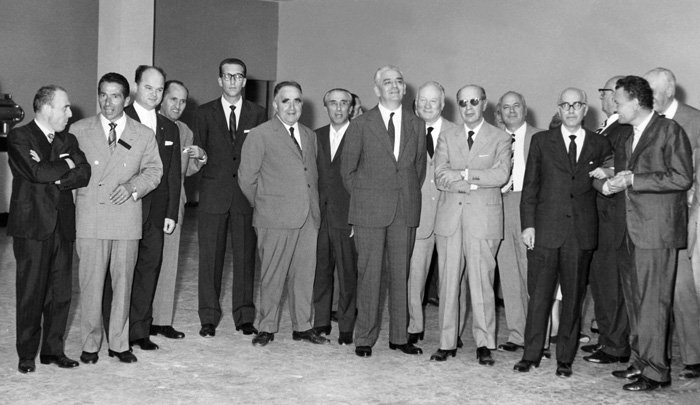 What a great photo! They’re all there, the founding fathers of the Salone del Mobile: Michele Barovero, Alessandro Besana, Franco Cassina, Piero Dal Vera, Vittorio Dassi, Angelo De Baggis, Mario Dosi, Aldo Falcioni, Angelo Marelli, Silvano Montina, Mario Roncoroni, Vittorio Villa. And Angelo Molteni far right. It was 1961. The Alta Italia delegation of the Federazione Italiana delle Industrie del Legno e del Sughero, headed by Tito Armellini, had decided to summon Italy’s 13 top furniture makers. Why? Simple. After the post-war reconstruction boom, Italians had stopped buying furniture, it was time to try our luck abroad. But Italian companies were still small, we couldn’t manage it on our own. So what were we to do? The answer was to join forces, organize a furniture fair in Milan and thus get foreign buyers to come here. In other words, work as a “system”. On 24 September of that far off 1961, 50 years ago, the very first Salone del Mobile was held in Pavilions 28 and 34 of the old trade fair facilities. It took no time at all for the Salone del Mobile to become a benchmark for the Furniture sector. And an instrument for the industry, which thus found an exceptional vehicle through which to promote its products. 1965 marked a watershed: the leading companies in the sector came together in a single exhibition space in pavilion 30/3. Yes, because there were still numerous firms producing classical furniture, while only a handful opted for modern designs. Manlio Armellini – who took his father Tito’s place as Secretary General and then Managing Director of Cosmit – understood that. Great attention started to be focussed not only on the products, but also on the way the stands were set up. Quality furniture, sure, but also dreams, style, a homely atmosphere. Visitor numbers grew: 12 thousand in 1961, and 328 Italian and foreign exhibitors in 1961. Exports rose from just over 5 million liras in 1960 to around 16 million in 1964. Alongside the Salone del Mobile, which “went international” in 1967, 6 other events were launched. 1974 saw the first Eurocucina (kitchens), ’76 Euroluce (lighting) ,followed by Eimu, devoted to the work place and re-named SaloneUfficio, the Salone Internazionale del Complemento d’Arredo (interiors), the Salone Satellite and Salone Internazionale del Bagno (bathrooms). The various trade shows thus made up one major specialized and heterogeneous fair, the symbol of a whole way of working and interpreting the modern furniture industry. Last year’s show attracted over 300 thousand visitors. In 2011 there are 2,720 exhibitors spread over 210,500 m², in the Fiera Milano expo centre in Rho, designed by Massimiliano Fuksas. But not only in Milan. Since 2005 Italian furnishings have gone to New York and to Moscow for the WorldWide Fairs. A trade fair designed to bring foreigners to Milan now takes the best of our production abroad and for years has offered collateral events to illustrate the state of the art and culture of project design. And to think that everything started from those 13 entrepreneurs who, in 1961, as Domenico Modugno sang three years earlier in the celebrated song “Volare”, had spread their wings to fly. Together.