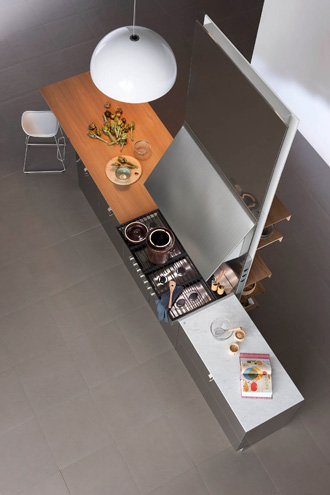 Set could only be the brainchild of a real cook. Neither a famous chef nor a desperate housewife but a designer who enjoys cooking for friends, Rodolfo Dordoni. And in his Set he made us a perfect Milanese risotto. On the other hand, the stats confirm that men in aprons have risen from 28% in the 1980s to today’s 43%. Almost at tipping point! So, who better than a designer cook to take charge of a woman’s domain? For Dordoni the kitchen is a domestic laboratory, a workshop where all the tools are within easy reach and all the shelves are open, like a bookcase. Because this space is also a living room, hi-tech but great to look at. And functional even in the tightest of spaces. No more mega volumes and dimensions. And anyway, who has such large houses these days? So Set goes back to the good old concept of American modular kitchens, where several units can be mixed and matched at will, according to the principles of efficiency, rational usage and an obsession with time. In a word, a kitchen Set. And memories are reflected in Dordoni’s project: the atmosphere of traditional kitchens with large hood-chimneys surrounded by cupboards, shelves, wood panelling and natural materials. Panelling in the kitchen? Yes, precisely. Because Set can develop vertically for small spaces, to exploit the whole height of the walls. The sloping hood, which is the fulcrum of the “totem” project is along the same lines. It can be placed wherever you wish in the space available and your working island or peninsula can be composed around it. An electrified hood, like the wall units, where all the technical components are out of sight. Because the kitchen needs to be functional, but also elegant and light. So the table has a slim, projecting top, which is attached to the working unit, the household appliances are built into the pillars, the wall panels have shelves folded over the front edge, the wall units have folding doors, the handles are customized and set at 45°, following the fake cyma of the door. The finishes and essences are teamed with refined tone-on-tone or contrasting effects. Steel, lots of wood and, in keeping with the real cook’s rock soul, 1970s’ lacquers. OK, it may not be Saturday night fever but Set would be perfect for Babette’s Feast.